Large event coverage tends to be more liberating than short or small events. You find yourself immersed in a multitude of photographic opportunities without any real time constraints. As a result, I can plan, I can wait, I can work and rework each moment until I arrive at contention.

I shot two days at the Porter County Fair alongside fellow photographer, Taylor Irby. We arrived the first day at 10–an hour into the fair. Despite this, things were still being set up and little else was going on so we wandered about the fair grounds, scouting things out. 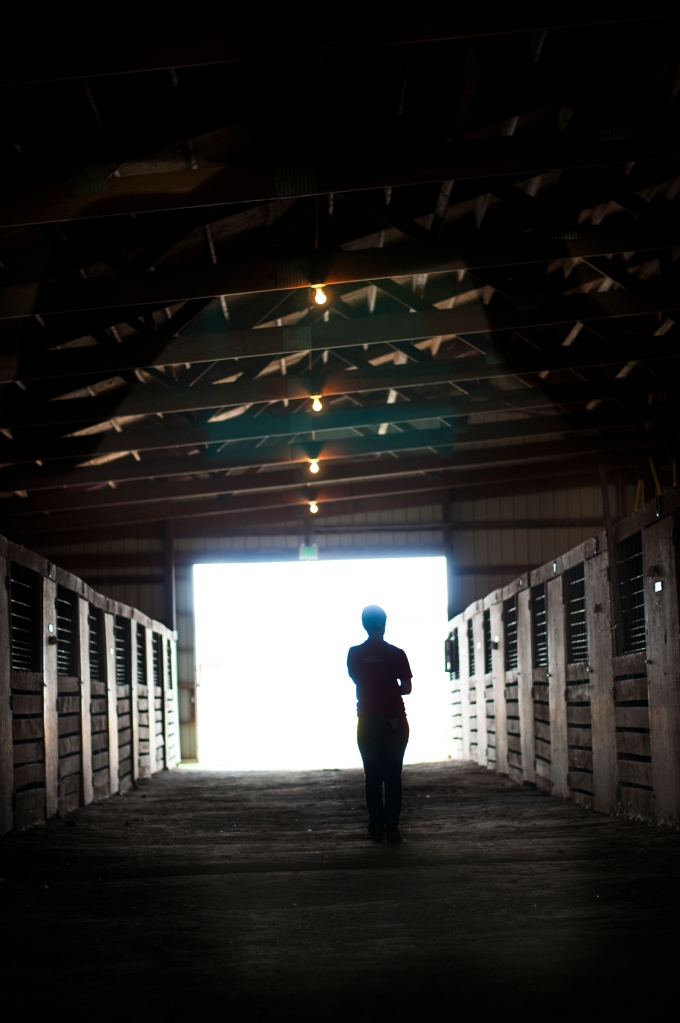 Ball State Student Taylor Irby makes her way through a barn that will be used to house horses during the later date s of the Porter County Fair on July 17. 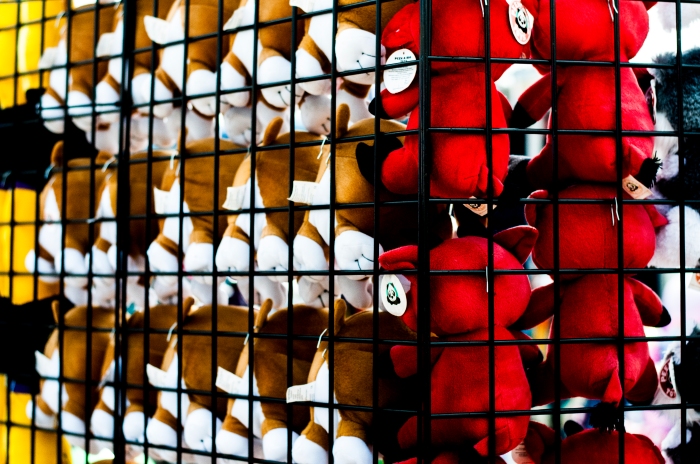 Prizes line a wall surrounding a game at the midway at the Porter County fair on July 17. The fair featured a midway as well as food, 4H, and other events.

The fair was essentially set up in three areas. There were the buildings that housed 4-H events and the other judged categories, a main strip of food vendors and some other small booths, and a midway with games and carnival attractions. Scattered throughout this were locations for a variety of free entertainment events (wood carving, high-dive demonstrations). 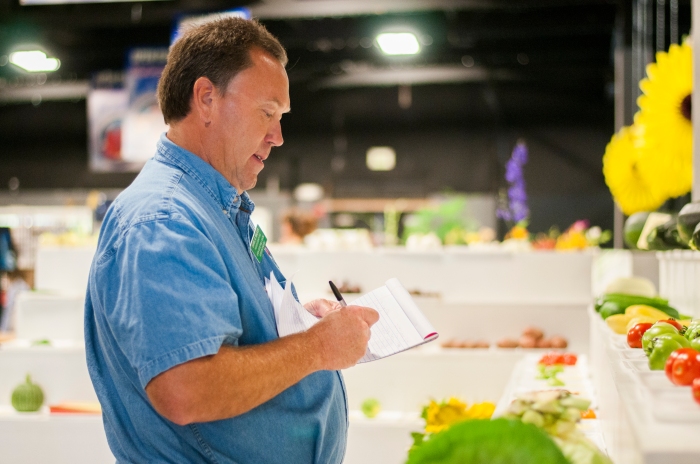 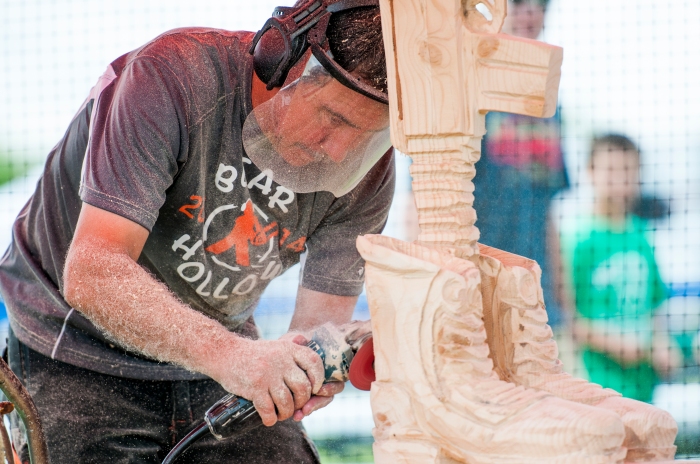 Mark Colp carves a statue from a log using a grinder on July 17 during the Porter County Fair. Colp was in attendance as part of the Echo Chain Saw Carving team and was doing demonstrations throughout the day. 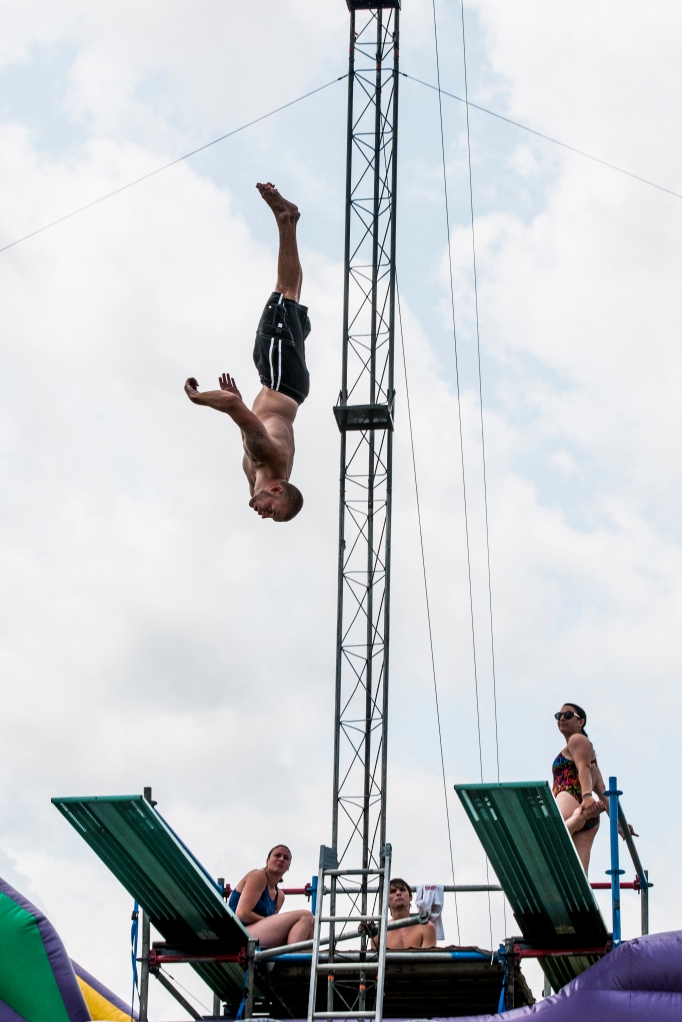 A performer makes a dive into a pool during a rehearsal for a performance later in the day on July 17 at the Porter County Fair. The fair offered a number of free entertainment events including a youth magic show and strong woman show.

As well as additional tents not belonging to the above categories which housed animals and vendors. 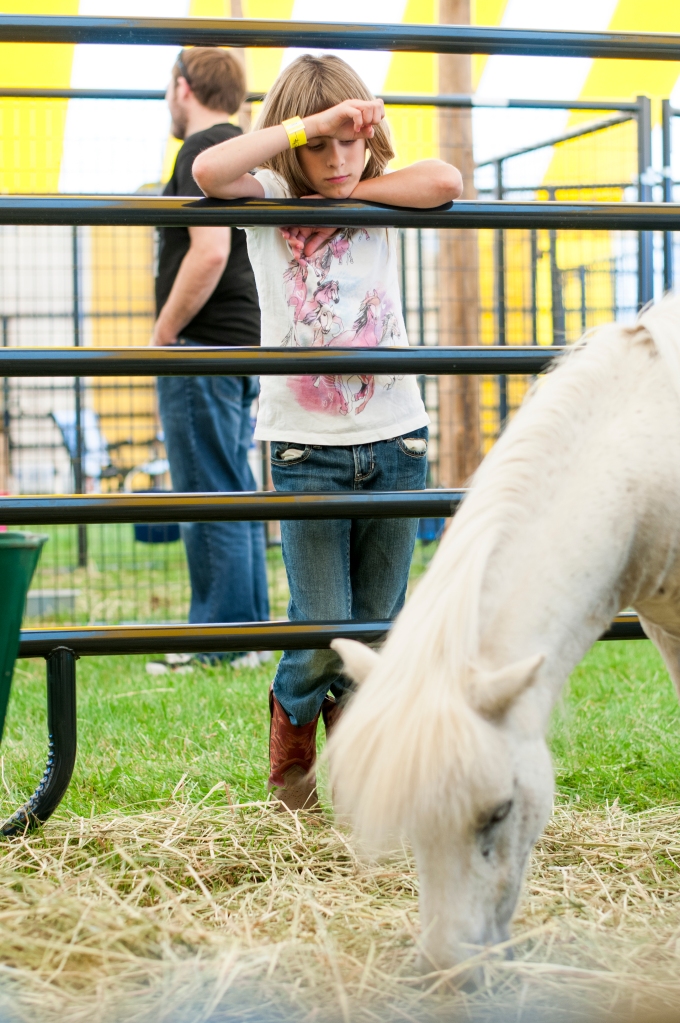 A girl examines a miniature horse on July 17 at the Porter County fair in a tent that housed a variety of non-competing animals.

While as there was a lot going on that first day, we were primarily interested in two events in the evening, the hot air balloon launch and glow. I was excited, less for the actual event and more for the possibility to create unique images. A lot fell into place. The event happened later in the day, not quite golden hour, but a far cry from the harsh midday sun. All silhouetted against beautiful clouds. 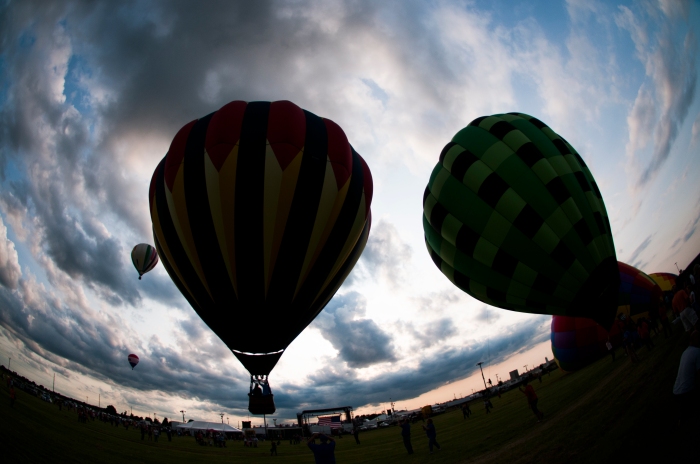 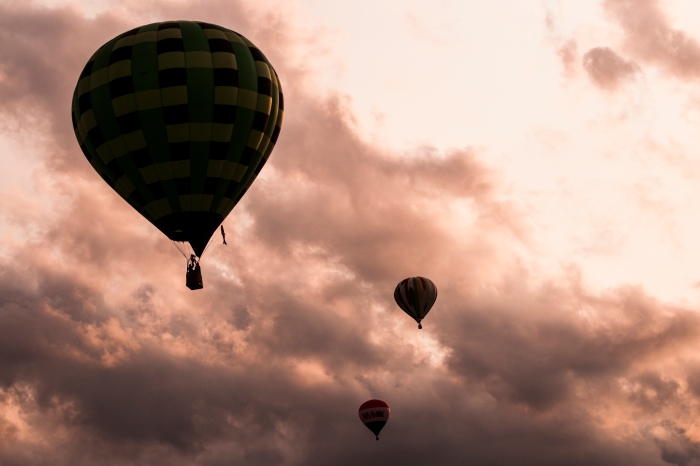 The first three teams in the air are carried downwind on July 17. The event was non-competitive. 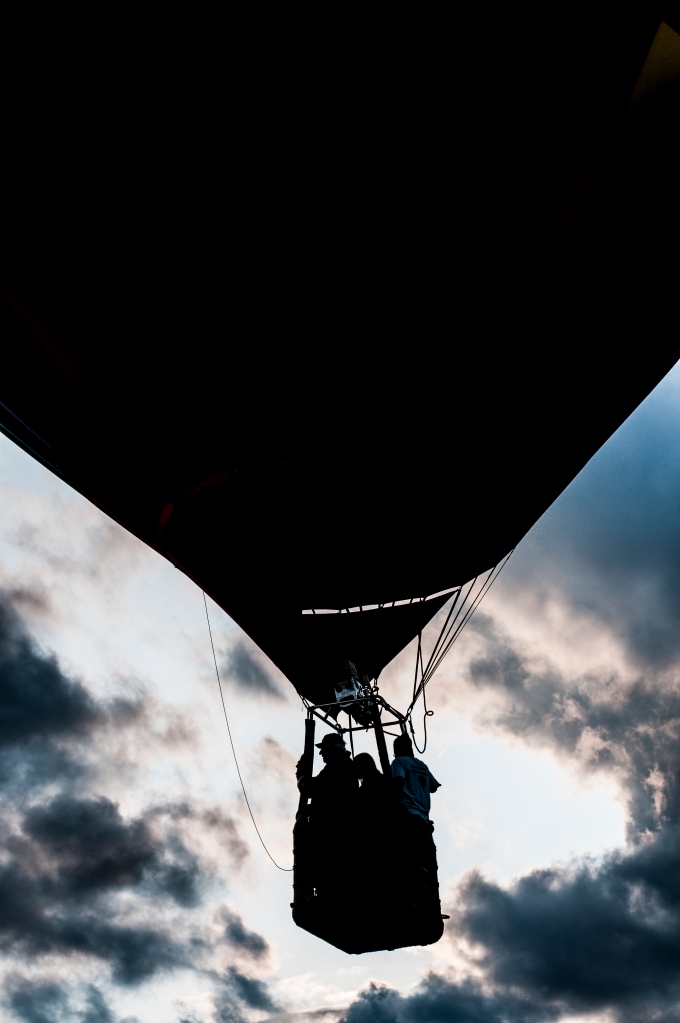 The last team makes it off the ground on July 17 and follows after the other teams.

The balloons took off, we worked our way back through the fair taking a break before they returned for the glow an hour later. Once again, things worked out perfectly. By the time the teams started filling the balloons, we had beautiful deep blue twilight skies. 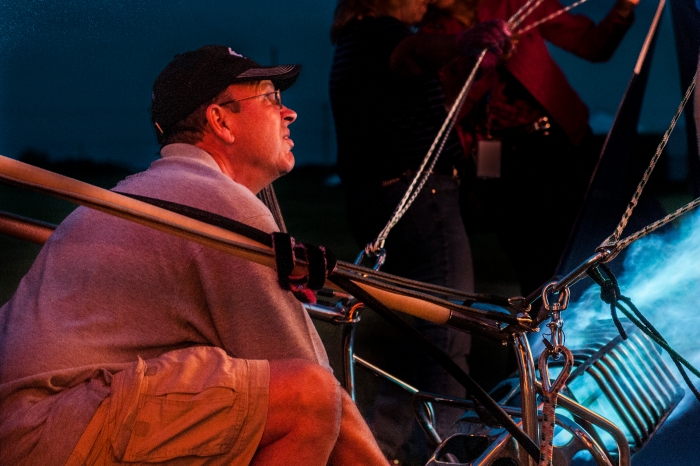 A balloon team member fills a balloon with hot air using a gas burner prior to the start of the glow on July 17. 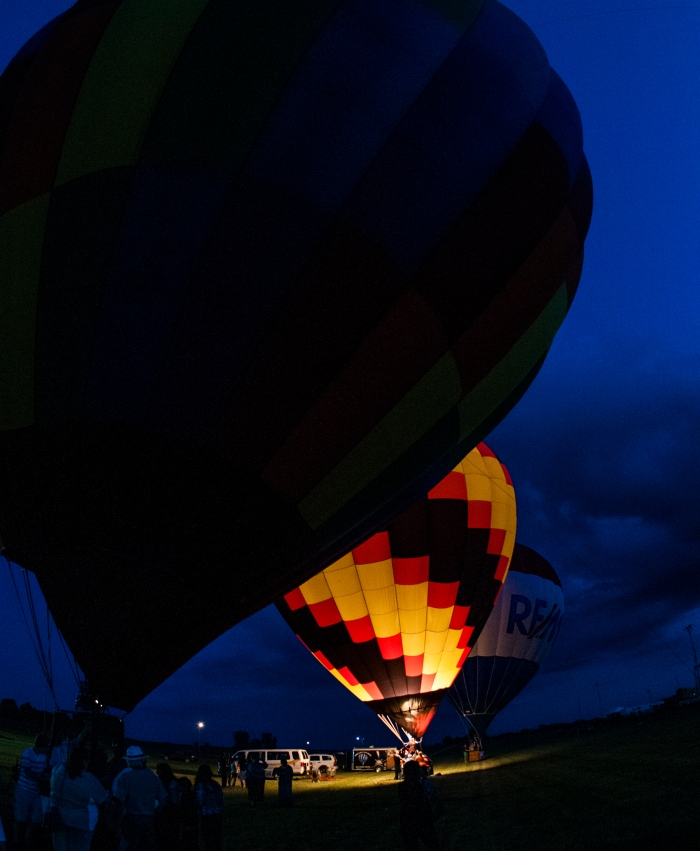 A ballon lights up during the twilight hours of the first day of the Porter County fair on July 17. The flames used a different gas/air mixture than the mixture used for flying as it produces a brighter flame.

Day two we showed up much later. Having checked the calendar of events, nothing new was happening in the morning. We stopped back by an artist we had met the day before, he was in the middle of a drawing and we grabbed a few shots of that. 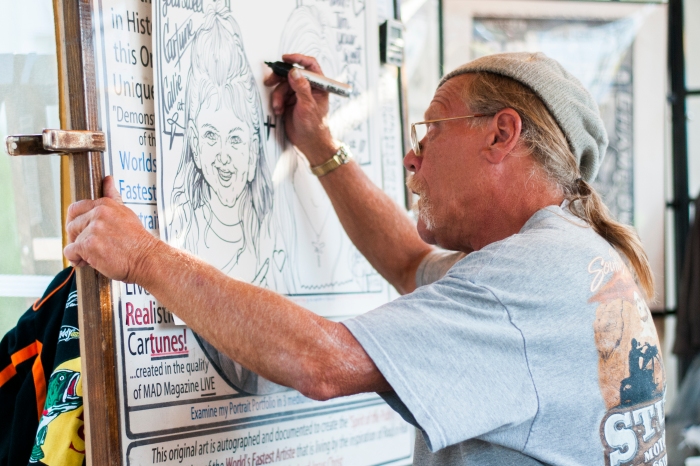 Robin Walker finishes up a sketch during the Porter County Fair on July 18. Walker is a Guinness Book of World Records holder and had a booth at the fair.

The 4-H buildings started to fill with more animals. On day two, dogs still occupied one, but rows and rows of rabbit cages now occupied another. 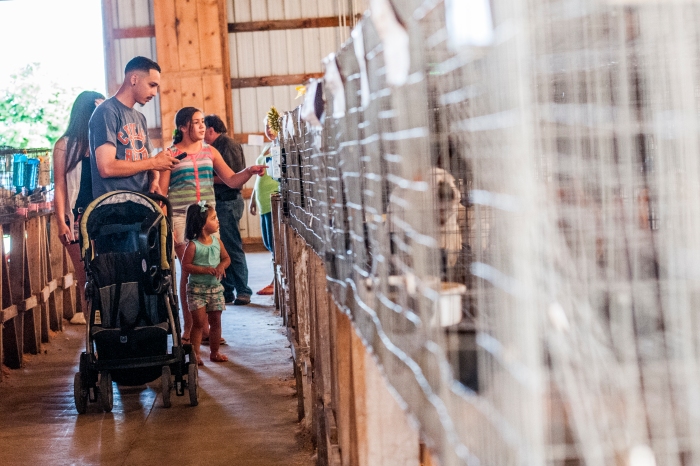 People make their way through rows of cages to examine the 4H rabbits prior to judging on July 18.

All of this was really just to buy time until dusk arrived. I was determined to grab some late shots of the midway during this time. I spent a lot of time as the sun went down playing with the sun as it shone across it. 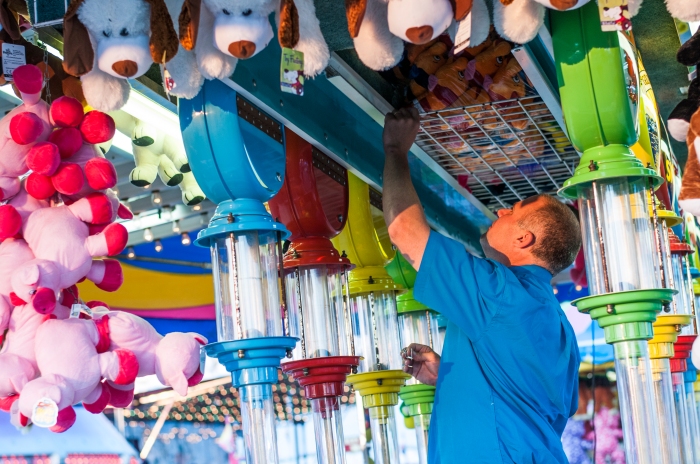 A game operator accesses some additional prizes above the game on July 18 during the Porter County fair. 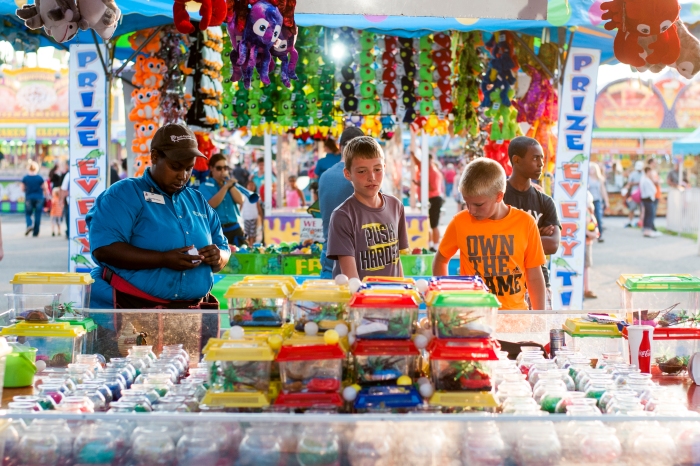 People step up with the hope of landing a ping pong ball into a fishbowl to win either a hermit crab or goldfish on July 18. 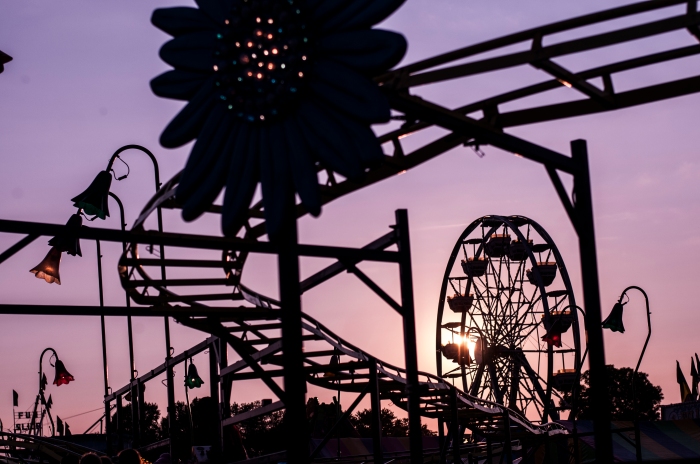 The midway of the Porter County Fair is silhouetted against the setting sun on July 18.

Ultimately, I did not end up producing anything anything I loved of the lights after dark. I wish I had more time, more evenings, but I had to go back to Ohio. The Indiana State fair runs 1-17 of August in which I will be doing a similar thing throughout that.