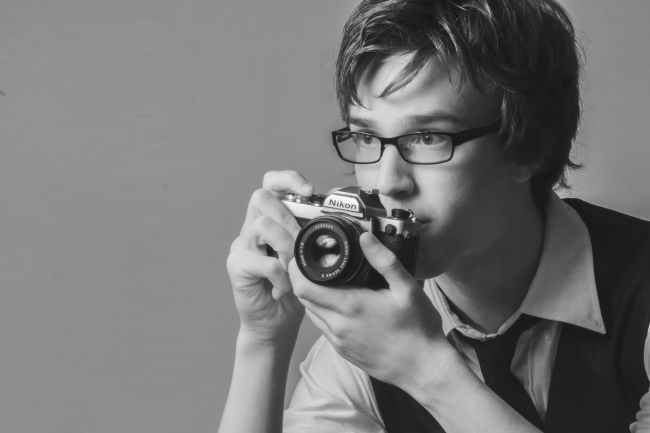 As part of the first photo in a challenge series I shot a self portrait alongside another photographer, Taylor. The rules were one light and it had to be a self-portrait. Anything else was game.

The idea was to shoot a modern fashion look in which the image felt intimate and non-commercial. The image had to not scream studio. So one broad-light source that could feel like a window or large source of natural light. This is where it started.

As I played around with ideas for the shoot, I had this concept of a vintage photographer. Formal. Older style camera. Black and white.

Before the shoot started I found my attire and props. I brought in a Nikon FM and an old Gossen light meter (dropped from the shot) to complete the photographer look. Next, I placed in the chair and found out where I would position myself. I used a light stand to sit in for focus.

Next came the light. It is quite unadventurous. Essentially it is a rembrandt setup for a forward facing subject, 45º off axis from the camera and 45º above the subject (necessary to prevent glare on my glasses). 320 watt/sec strobe shot through an umbrella. The one take away is that the light close is probably only about 18-24 inches from me here. This is essential for the short falloff across my face.

FInally for the actual shooting, Portrait shoot means at least 80mm. So I mounted my 70-200 on a tripod and switched my camera to timer mode. This was by far the hardest part, because it was taking the shot and running to the back of the camera looking for mistakes and trying to fix them in the next shot. The constant back and forth consequently caused problems with composition. Slowly though, as the shoot progressed, I realized I wanted to go tighter. I started at 70mm and a full body and ended at about 135 and about a bust length shot. Ultimately I ended up shooting this loose due to my inability to stand in the same place after each shot.

The processing runs through my general black and white editing. Give the reds and orange channels in Adobe Camera Raw a little luminance boost. Increase contrast and mind the highlights and shadows. This time I gave the hair, camera, and my clothing a clarity boost with an adjustment brush to highlight texture and contouring.

Once in actual photoshop I matted out the photo with a curve adjustment to bring out some shadow detail. I also ended up cropping and reframing the shot. Tightening it up and adding some additional background in the pursuit of an actual composition.

I do not like self portraits. They are difficult, but for no other reason than you cannot see yourself as you make adjustments. You cannot see the composition until after the fact as opposed to before the shot is taken and all you can hope is that you hit your marks.

See what Taylor Irby shot for this challenge here

One thought on “Self portrait challenge”